It’s a classic tale of “one thing led to another.” Microphones were purchased. New audio interfaces were hooked up. New software, plugins, and sound pathways were examined. What began as an experiment to test what I could come up with from simple, one-instrument-and-voice renderings of songs from the past two years, to see how I could do recording and mixing them one at a time on my own, quickly moved to the idea of a short EP and ultimately to a full CD. I had long hoped to find an engineer to record a new set of songs that I knew would be entitled Evolution… I just didn’t realize at the time that it would end up being me. 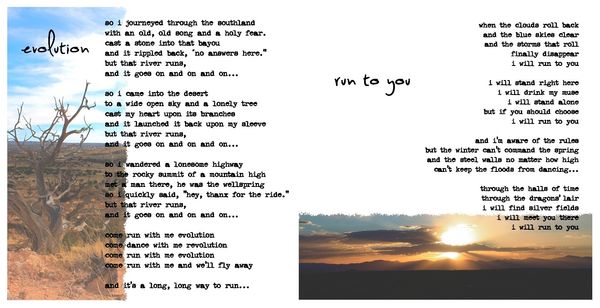 So, yes, a CD release is impending, and I’m so happy that my friends (Facebook and otherwise) have been stoked about it and wanted to know where to buy it. But make no mistake- I have not been “discovered.” Like so many other musicians these days, I have entered the DIY universe. I recorded, serving as my own engineer. I performed or programmed all the instruments and vocals but the viola, tracked by the young Allie Norris, a young violist from the United Church of Santa Fe who is now attending McGill University. I did the mixes and created my own arrangements. I did the package design on the CDs, right down to the photography. So I am pleased with, perhaps even proud of, what I’ve been able to accomplish, but for different reasons than you might have initially expected.

One of the most difficult aspects of this process (besides, of course, the gargantuan learning curve that is Pro Tools) was figuring out how to mic (and then EQ) the piano. The sheer size of the instrument makes it difficult to capture without a bunch of weirdness. Over the past few years I have come to learn that I actually have strong opinions about how the piano should sound on a recording, and while I’m sure I’ll be continuing to learn better ways to do it, I’ve ultimately found some preliminary success by using four (yes, FOUR) mics at various locations on the piano. A stereo pair (Rode NT-55s) was placed toward the top end of the piano, with two wide-diaphragm condensers (AKG Perception mics) at the lower end. All four together helped to cover the entire spectrum of the instrument. Perhaps next time I’ll use six mics! Also, the High Pass Filter became my new best friend. Overall, the mic placement and EQing helped to cut down on the boomy boxiness and fuzziness that can happen when recording the piano. I am not a fan of pulling my voice way out front in the mix, and I find that the better the piano is recorded, the more of an equal partner it can be to the more easily captured vocals. 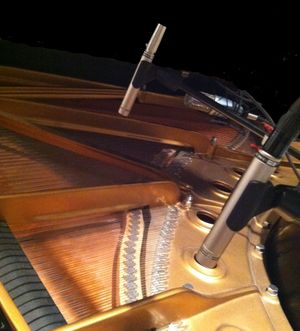 It takes a village...

These songs are all piano-driven (I hope to do good recordings of some of the guitar songs like “Stand” and “Rain” next). The arrangements themselves are pretty simple. Some of the songs are still just voice and piano- they didn’t want anything else! Others are slightly more complicated, with strings, loops, and some electronic instruments. Overall I wanted the basic essence of the songs to come through without too much distraction. Big productions are fine, but both my personal tastes and my newness to the process made me feel that less was more. The vibe of the mixes ranges from spare singer-songwriter to slightly folky or Celtic (like the fiddle of “Walking in Babylon” or the Celtic-inspired piano turns in “Run to You”) to the slightly electronic influence of some of my favorite modern artists like Radiohead or the newer work of Tori Amos. Just a little dirt here, a little fuzz there, a little backwards reverb to bring us into the new section. Sometimes, all these elements come together to form a sound that feels like me.

As you might expect from my work, the CD is a journey. The very title track, “Evolution,” deals with the idea of traveling through different destinations in life looking for truth that one ultimately goes on seeking forever. The songs deal with themes of looking into ones own darkness and accepting the gifts of grief, of embracing change wherever it comes, and of growing into oneself. It speaks of standing your ground and holding firm to your own truth, regardless of the threat it might present to others who are not ready to look within themselves. It acknowledges that some people and events become a part of you forever, and that trying to push down or amputate those pieces is fruitless, if not dangerous. It embraces emotions from hopefulness to anger, from grief to strength and acceptance, bringing to mind the words of Emily Dickinson:

“Anger as soon as fed is dead. ‘Tis starving makes it fat.”

Hopefully the overall journey is about becoming more human, a complete person that can embrace darkness as well as light. The CD ends with the suggestion of connection to another human being as a full spirit, capable of self reliance as well as interdependence, once the appropriate situation should arise.

But, in the meantime, the protagonist will always have her shoes.